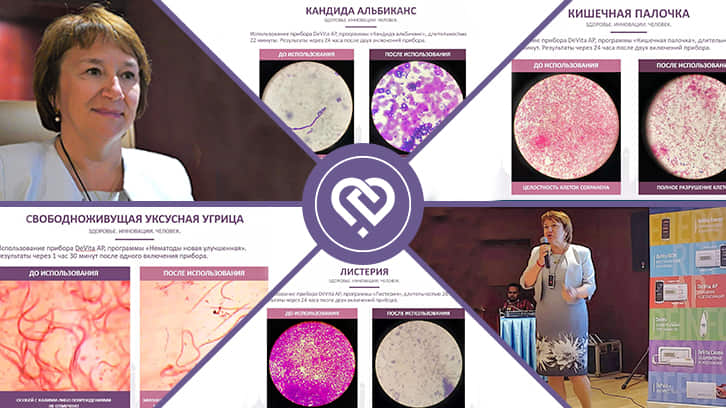 The first and keynote speach at the International Leaders Conference was made by the founder and chairman of the DEHolding Board of Directors, Academician of Medical and Technical Sciences, Specialist of the DeVita Bioresonance Technologies Mrs. Tatiana Konopliova.

The purpose of the experiment was to neutralize these nematodes by exposing them to bioresonance frequencies.

The experiment was conducted under the supervision of Alexander Milisnikov, Doctor of Biological Sciences, Medical Parasitologist, Geneticist, Senior Researcher at the Institute of Ecology and Evolution of the Russian Academy of Sciences.

Results of experiments:
- When in resonance with the biological radiation of the nematode organs and systems, the DeVita AP Base device caused a rebound, overload and subsequent damage to the target structure.
- This approach in the case of a parasitic potato nematode has allowed a 50% efficiency using the method of in vitro in some samples.
- When a program with repeated high frequencies was used on the target, a fast result was obtained.
- The paralysis of the representatives of the vinegar nematode under the influence of electromagnetic radiation started from the tail, the last paralysis occupying the front of the nematode, while almost all the large females died.
- In the case of vinegar nematode, the experimental results reached 80% in the in vitro method.
- Apart from the fact that this method proved to be excellent at the beginning of experiments with direct irradiation of crops, we could observe the effect even one day after exposure.

The experiment was conducted under the supervision of Ekaterina Kachanova, Doctor, Parasitologist and Researcher at the Institute of Fundamental and Applied Animal and Plant Parasitology named after K.I. Skrymin.

Results of experiments:
- Effect of 100% on the destruction of microorganisms by the bioresonance effect of the DeVita AP Base in a solid environment was achieved only on E. coli cells.
- The radiation did not significantly affect the growth of other tested microorganisms. However, less pronounced growth was observed in the test plates than in the control plates.
- To evaluate the effect of electromagnetic radiation on cells, a second experiment with microorganisms in a liquid environment - meat-peptone broth- was performed.
- In the second experiment, more intense results could be achieved in destroying the microbial cells by bioresonance exposure by the DeVita AP device on almost all the tested microorganisms. This is probably due to the electrical conductivity of the environment, the exposure area and the ability of the microorganisms to grow in certain media.

Personally, Mrs. Tatiana Konopliova mentioned in more detail the course of the research: what were the expected results? which paths open after the experiment? what will be the next research.

Tatiana Konopliova's performance inspired and fueled the interest of all visitors for the rest of the training days.